UA-RM#DiscoverEU is a proposal by IDEP Moldova to the European Commission in order to offer support to 18 y.o. to travel between Iasi-Chisinau-Odessa by train between 1 February 2022 and 31 December 2022.

The tourism industry needs concrete measures to attract tourists, respecting all restrictions and rules,  otherwise, a lot of them could stop their activity temporarily or definitively due to almost 18 + months of circulation restrictions caused by COVID-19. UA-RM#DiscoverEU proposal is designed to save workplaces in the tourism industry that is mostly affected by COVID restrictions. By UA-RM#DiscoverEU proposal is possible to stimulate regional tourism via rail for short visits (like City Breaks) made by the young generation in the declared 2022 — European Year of Youth.

UA-RM#DiscoverEU proposed by IDEP Moldova to the European Commission aims to offer to 10 000 beneficiaries (18 y.o.) from 3 regions (Iasi, Chisinau, Odessa) support to travel between Iasi-Chisinau-Odessa by train.

To be eligible for this UA-RM#DiscoverEU is a proposal is necessary to be:

!!!This is not a launched program!!! This is a proposal by IDEP Moldova to the European Commission!!!

As an Ambassador DiscoverEU or DiscoverUA-RM Ambassador, the teen is encouraged to share their impressions via social networks, by promoting regional tourism via available regular rail route Iasi-Chisinau-Odessa.

The total budget of this proposal is limited to 300 000 euros.

All procedure is designed to be using online platform directly by the European Commission.

Please find here the progress of the proposal development.

Please find here the support letters addressed to EP President requesting support in the process of the DiscoverEU approval.

MEPs written questions regarding the Iasi-Chisinau-Odesa rail route and the extension of the DiscoverEU to this corridor.

Extensive consultations at the Iasi, Odesa, Chisinau, Brussels about the Iasi-Chisinau-Odesa rail route and DiscoverEU extension 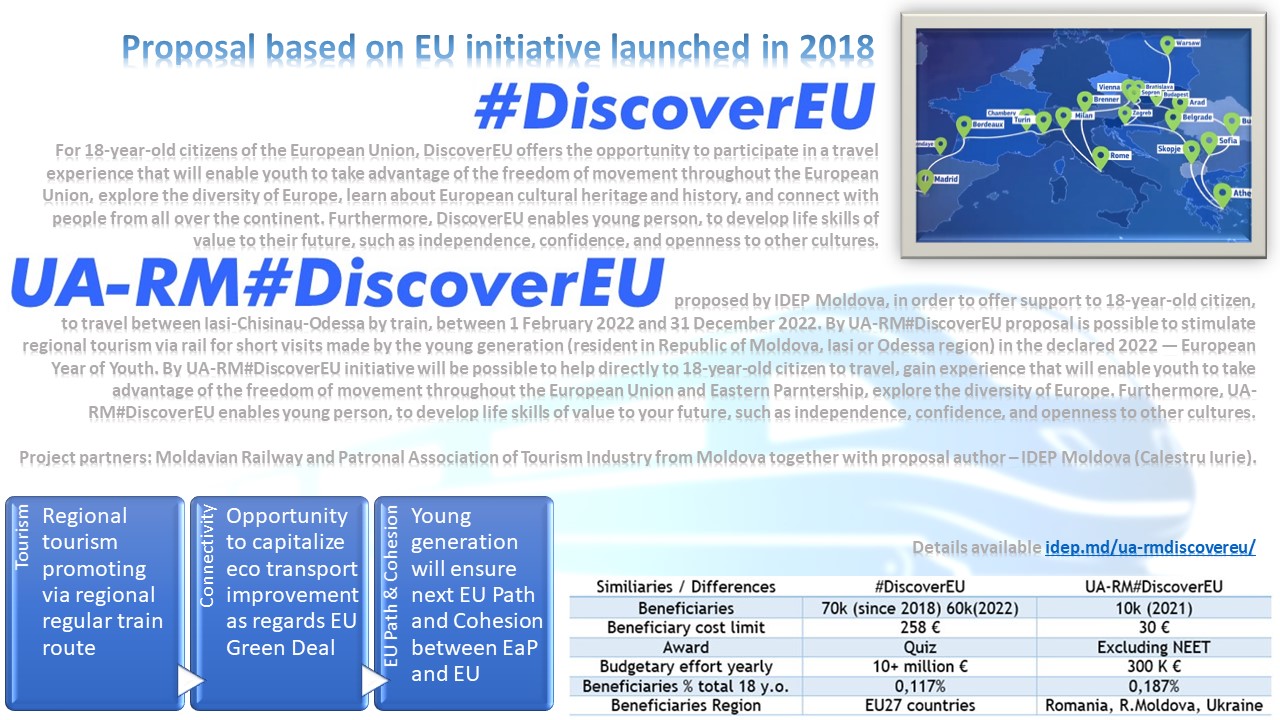