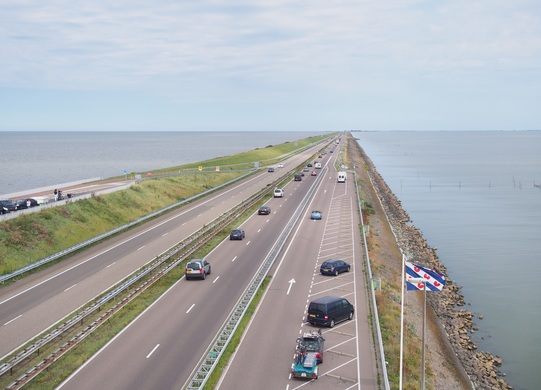 BAM PPP has announced that the Afsluitdijk causeway PPP project in the Netherlands has reached financial close. The contract value of the project is EUR550 million (US$638.4 million).

As reported on this platform, BAM PPP was awarded the project in February this year, in consortium with Van Oord and Rebel. It involves the reinforcement of a 32km, 90m wide causeway, situated 7.25m above sea level. The Afsluitdijk was constructed between 1927 and 1932.

Senior debt will be provided by the European Investment Bank using its Structured Finance Facility. The financing is guaranteed under the European Fund for Strategic Investments (EFSI), the central pillar of the Juncker Commission’s Investment Plan for Europe.

The design, construction and long-term maintenance of the reinforcements will be completed by BAM Infra and Van Oord Nederland. The consortium will use ‘Levvel-blocs’, innovative concrete elements that have been developed specially for the Afsluitdijk.

As well as reinforcing and raising the causeway, the consortium will expand the drainage locks and construct two large pumping stations, so that sufficient water can be drained even when the sea level is high. It will also widen the emergency lanes of the motorway that utilises the causeway — the A7, and construct a cycle path on the Wadden Sea side.