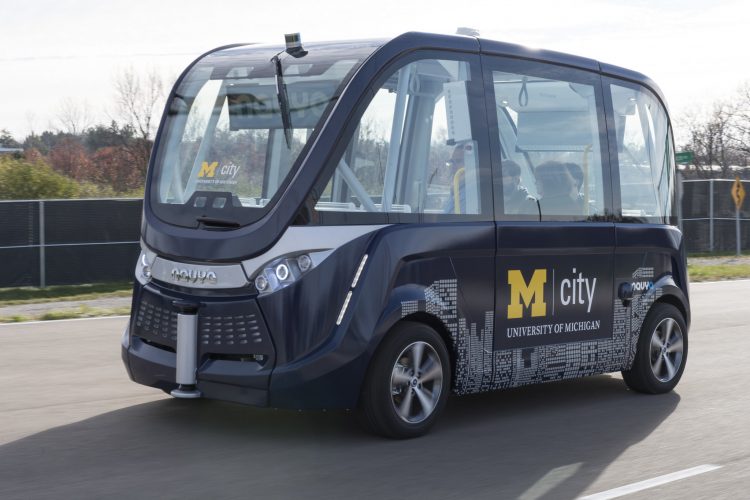 The Mcity Driverless Shuttle, a research project of the University of Michigan (UM), is put on road Monday on UM’s north campus.

The shuttles are equipped with lidar, which uses invisible laser beams to build a view of the surrounding environment, and GPS for localization. While interior cameras record the reactions of riders inside the shuttle, exterior cameras equipped will capture the reaction and behavior of other road users, including other vehicles, bicyclists and pedestrians.

“The research obtained from our surveys will help the industry understand the rider’s experience on the driverless shuttle as well as non-riders who interact with the shuttle as it operates on UM’s campus,” said Kristin Kolodge, executive director of driver interaction and human machine interface.

While the shuttles are driverless, a conductor will be on board at all times, with the ability to immediately stop for safety reasons.

About 1,000 test runs of the shuttles have been conducted inside the test facility. In total, approximately 500 hours of testing and training were completed, including 200 hours of training by the conductors.

The shuttle will run on UM roads from 9 am to 3 pm Monday-Friday, weather permitting. There will be no cost to riders, and the two shuttles will cover the route roughly every 10 minutes.

Mcity is a UM-led public-private partnership to accelerate advanced mobility vehicles and technologies.