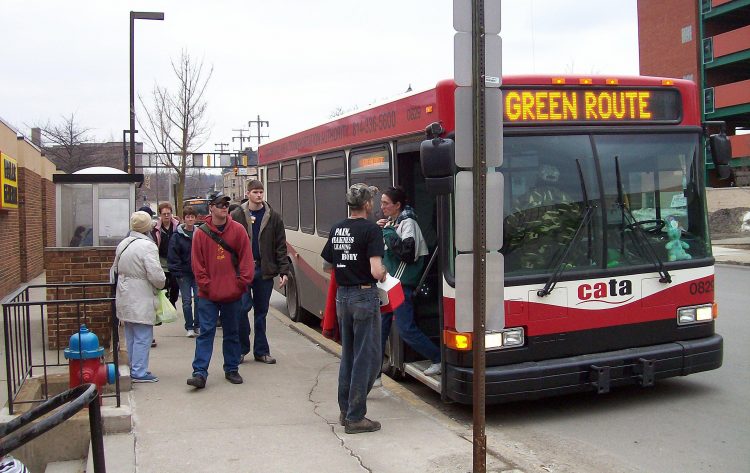 Officials from around the region gathered to mark the official beginning of the next phase in Crawford Area Transportation Authority history Thursday at a ribbon cutting ceremony for the new Rogers Ferry Road maintenance facility.

“What your see here is the result of eight years of planning,” CATA Executive Director Tim Geibel told the crowd of nearly 75 elected officials and municipal administrators, Pennsylvania Department of Transportation representatives, members of the transportation industry and CATA employees, many of whom had played important roles in developing the site. “This facility is our home and it will be our home for the next 30 years.”

The station expands CATA’s maintenance, wash and storage capabilities and provides a single centralized location for the authority’s Meadville-based fleet. In the past CATA stored buses at four locations around Meadville, according Larry Marsteller, who chairs the board that oversees the authority.

In addition to the improved efficiency provided by a central location, a compressed natural gas (CNG) fueling station at the 2.35-acre facility will help increase the CATA fleet’s fuel efficiency. Three CNG buses joined the fleet in February.

The CNG station is one of 29 being constructed around the state over the next several years. The project is part of an $84.5 million public-private partnership between the commonwealth and Trillium CNG. The 20-year agreement calls for Trillium to design, build, finance, operate and maintain the stations. PennDOT estimates that the project will pay for itself with approximately $100 million in savings over 10 years.

State Sen. Michele Brooks, one of several officials to follow Marsteller and Geibel in addressing the crowd, stressed the role played by public transit in rural areas.

“We have a lot of ground to cover and we don’t have the mass transit that some areas have,” Brooks said. “These services are so important to the residents of this area and this region, whether it’s a senior citizen getting back and forth to doctor’s visits or going to the senior center, to visit a loved one, going to the grocery store, or picking up prescriptions or someone traveling to work. Those are all important, vital services, and I want to thank everyone here at CATA for really taking a team approach.”

Authorities consider PPPs for US$6 billion transit corridors in Miami
How does the evaluated infrastructure evolve? It expands.