Why did the elephant cross the road? 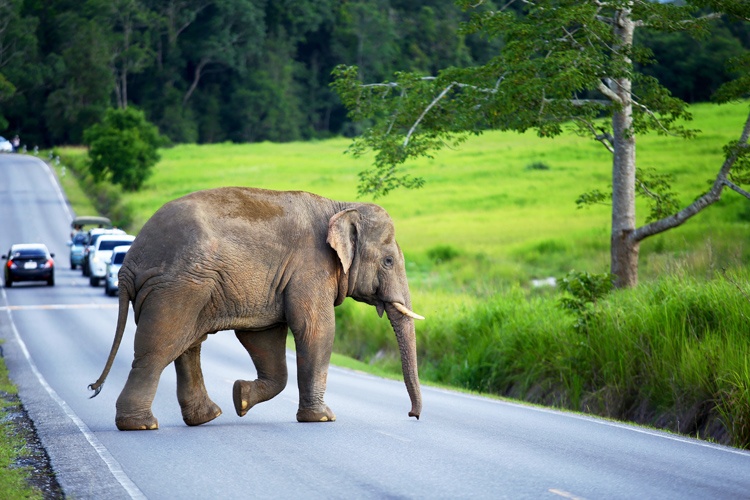 In the early 1950s, carving out a road in the newly-created Tsavo National Park in Kenya involved “hacking through scrubland,” according to Dame Daphne Sheldrick in her memoir, Love, Life, and Elephants. Founder of the David Sheldrick Wildlife Trust, an organization that rescues orphaned elephants and rhinos, she describes the park landscape as “inhospitable country, covered in an entanglement of dense scrub vegetation infested with tsetse fly…” but “known for its diversity of indigenous species, including fearsome lions, breeding herds of elephants, and thousands of black rhinos.”

Today, the two-lane Mombasa-Nairobi highway (A109) dissects the park to form Tsavo East and Tsavo West. This causes problems for wildlife. Richard Leakey, Chairman of Kenya’s Wildlife Service, says that 18 elephants have been killed from collisions with trucks, and other wildlife become roadkill on a regular basis.

“We do want infrastructure where we can get to a good standard of living, and we do want wildlife,” said Leakey at a World Bank presentation in April 2017, where he spoke on current challenges to Kenya’s wildlife such as climate change, poaching, and infrastructure development. But he said reconciling the two needs facilitation and dialogue to move beyond pure opposition between conservationists and developers.

This Saturday, March 3, marks World Wildlife Day—an ideal time to consider whether infrastructure and wildlife can successfully intersect. This is especially important as roads and railways passing through wildlife-rich areas are on the increase across the globe.

Some experts say animals and vehicles can be managed if solutions are factored into development plans from the beginning.

Other specialists are skeptical.

“As we break off wildlife corridors because of infrastructure and increasing human populations we are putting the ecosystems on life support,” said World Bank lead economist Richard Damania. “There are some who believe we can manage these closed ecosystems, but it takes an immense amount of self-assurance and confidence in our understanding of ecosystems to suggest this with certainty.”

Linear infrastructure in Asia threatens to unravel tiger conservation efforts. In addition to tiger poaching, their habitat in Asia is fragmented by roads, railway, high-tension wires, as well as water and gas pipelines. According to a recent report from the World Wildlife Fund, at least 11,000 kilometers of new roads and railways are planned for construction through prime tiger landscapes.

Roads cutting through the Amazon threaten biodiversity. The Peruvian Congress recently approved a bill declaring it in the national interest to construct new roads in the Madre de Dios region, which would cut through a mosaic of different protected areas in one of the most biologically diverse places on earth and could lead to loss and isolation of animal habitats.

Railway lines crossing elephant habitats in India have led to over 200 elephant deaths. Wildlife experts say India has the largest number of train accidents involving elephants in the world. Just last month a 14-car passenger train in northeastern India plowed into a herd of elephants killing two calves and three adults; in December another five fell victim to a train collision.

In another scientific paper published in 2017, the authors project that 25 million kilometers of new paved roads will be built by 2050 (enough to circle the planet more than 600 times), with 90 percent constructed in developing countries—which hold the world’s most biodiverse areas.

The road ahead does not have to be altogether bleak for wildlife if governments, planners, and investors in infrastructure projects—including multilateral development banks (MDBs)—consider these interventions:

Governments should consult civil society groups, NGOs, and technical experts when developing infrastructure-related policies in these areas. MDBs and private investors can make sure the potential consequences on wildlife from large-scale road and highway projects are thoroughly assessed and addressed before providing financing.

Let’s work to ensure they don’t take root to contribute to the demise of the world’s iconic wildlife.

Learning from Japan: PPPs for infrastructure resilience
The next Costa Rica? PPPs in Nicaragua are making that possible