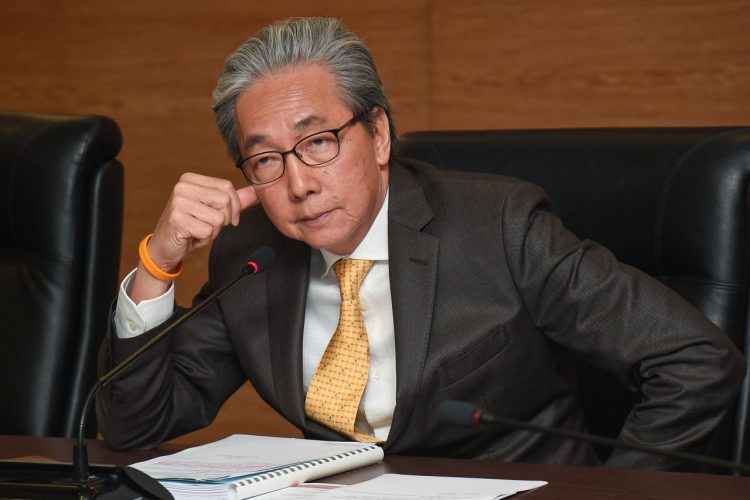 The government is committed to investing up to 111.9 billion baht in high-speed railways linking the three main airports — Don Mueang, Suvarnabhumi and U-tapao — to serve the government’s flagship Eastern Economic Corridor (EEC) scheme.

Nathporn Chatusripitak, a spokesman for Deputy Prime Minister Somkid Jatusripitak, said the new high-speed railway will be developed under the public-private partnership scheme, with the government paying the first 3.57 billion baht for land appropriation and the remaining 108.33 billion in 10 years after the trains begin operation.
The build-operate-transfer project is valued at 224.54 billion baht and comes with a 50-year concession.
Mr Nathporn said the private partners will be tasked with investing in civil works, signalling systems, trains, property development and maintenance.
The cabinet last Tuesday approved the high-speed railway linking the three main airports and the 3.5-billion-baht budget to finance land appropriation.
The railway involves extending Bangkok’s present Airport Rail Link (ARL), which runs to Suvarnabhumi in Samut Prakan, to connect to Don Mueang in Bangkok and U-tapao in Rayong. The entire route will be about 220 kilometres long and reach a maximum speed of 250 kilometres per hour.

The route comprises nine high-speed stations: Don Mueang, Bang Sue, Makkasan, Suvarnabhumi, Chachoengsao, Chon Buri, Sri Racha, Pattaya and U-tapao.
It will take 45 minutes to transport passengers from Bangkok to U-tapao, with a fare of 330 baht.
The majority of the railway expansion will be built along an existing route operated by the State Railway of Thailand (SRT). An inner-city train travelling in Bangkok will have a slower speed of 160kph, while the rural route can reach a maximum speed of 250km per hour.
Makkasan station, one of the ARL stations, will be turned into the central station for the high-speed rail. Moreover, the areas along the railway will also be included in the EEC scheme for development purpose.

The concession will be owned by the SRT, with the government expecting it will yield an economic return of 700 billion baht and carry 147,000 passengers a day.
Mr Nathporn said the EEC Office is expected to announce terms of reference for the project in April, with a joint venture contract expected to be signed in December. The project is scheduled to become operational in 2023.
In related news, Deputy Transport Minister Pailin Chuchottaworn said the ministry plans to develop other infrastructure projects such as motorways to link the EEC with Bangkok, the Northeast, the eastern region and Cambodia.